My Blog About Elton John

Today, March 25, is Elton John’s birthday. He was born in 1947, so he just turned 70 years old. It’s somewhat hard to think of Elton as being in his seventies! He is so dynamic and full of life. But then, people stay younger longer than before. 😉 He has now been recording music for 50 years, much to our enjoyment. I’m sure he will celebrate his birthday in style! 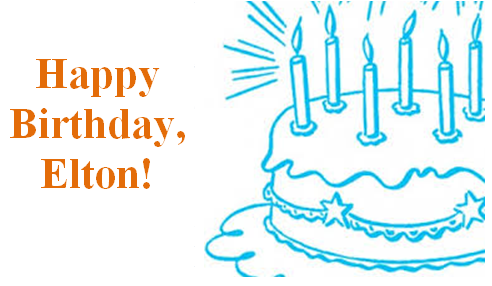 This year also marks the 50-year anniversary of his songwriting partnership with lyricist Bernie Taupin, who has collaborated with him on most of his albums. Bernie writes the lyrics, then Elton puts music to the words. This recipe has been working well since the beginning, and it has been wildly successful, to say the least. I would even say that it is magical.

To highlight Elton’s birthday, there will be a gala tonight in Los Angeles in support of the Elton John AIDS Foundation and the UCLA Hammer Museum. Lady Gaga and other artists will perform, and the ceremony will be hosted by Rob Lowe.

For his 50th birthday party, in 1997, Elton had dressed as King Louis XIV, with a wig that was 3 feet tall! I’m not sure it was very comfortable, but his costume was certainly impressive! I’m looking forward to see what he has in store for this year’s birthday party!

Among the other celebrities that have their birthday the same day as Elton, let’s mention actress Sarah Jessica Parker, guitarist and singer Jeff Healey (who died of cancer in 2008), baseball pitcher Tom Glavine, and Aretha Franklin, who is 5 years older than Elton. Yes, Elton shares his birthday with The Queen of Soul!

Don’t hesitate to share your memories of past Elton John Birthdays by leaving your comments below!

Well, EltonLinks.com used to be mainly a directory of Elton John links. However, there are hundreds, thousands and even millions of Elton John sites on the net. And of course, the Internet is an everchanging place, and many sites are created or deleted every single day. So I have decided to transform this website into a blog about my experience being an Elton John fan. I will write album and book reviews here and there, but I will also talk about the little things that spice up a fan’s life. 🙂

I have converted the old HTML website into a WordPress blog for ease of use. I also refreshed the Elton John FAQ and the Links Directory. I had started this adventure by creating a website on the free Geocities platform when it came out in the mid-90s. Ordinary people could create free websites about almost anything they wanted. This free website community was divided into sub-domains called neighborhoods that were in fact themes that matched the subject you wanted to write about. I had chosen the Hollywood neighborhood to host my site. After all, Elton has his star on the Hollywood Walk of Fame! Plus, there was no music-specific neighborhood yet when I created my site, so Hollywood was the best match for a celebrity fan site.

The Geocities platform made it easy to build a website, even though very few people had ever done it before. We were all learning on the job, so to speak, and it was a lot of fun! There was a very limited amount of websites on the Internet back then, especially compared to today’s infinity, so I started listing Elton John sites as I was finding them, then sorted them into categories after a while. I then decided to buy my own domain name in July 2000, and moved my Elton John Links Directory to a web host.

Now, after several years of not updating my site, I have decided to give it a much needed facelift and to bring it back to life, but with a focus on blogging about Elton. I hope you will like the articles that I will write in the future. I invite you to subscribe to my Elton John Blog newsletter in the top right corner to get informed of new posts as they are published. Feel free to share your comments below!

You will find the old site layout here. (Link removed, as the new site is up and running!)

Make sure you come back soon, as I will be writing awesome Elton John posts!

Fill out the form to receive an email each time a new article is posted on the blog.