My Blog About Elton John

Over the years, people have asked me all kinds of questions about Elton, and I’ve always tried to answer to the best of my knowledge. I have put some of these questions in this Elton John FAQ along with some answers. If you have a different opinion or answer to a question, or if you have a question of your own, don’t hesitate to contact me. 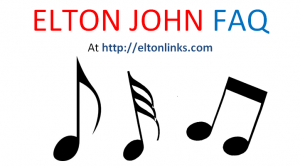 Answer: Elton’s real name is Reginald Kenneth Dwight. In the mid-sixties, his stage name was Reg Dwight. But he didn’t like his name, he didn’t think it sounded too hip, so he decided to change it. In his band at the time (Bluesology), the saxophonist was called Elton Dean, and he really liked his name, so he took Elton from there. He took the name John from Long John Baldry, a British Blues singer whom the band Bluesology was backing. He launched is first album, Empty Sky, in 1969 under the name of Elton John. He officially changed his name to Elton Hercules John in 1974.


Question: In the song Levon, Bernie Taupin wrote the lyrics: “And the New York Times said God is dead, and the war’s begun…”. I was curious if that was the actual headline, if the New York Times was the publication in question, and what event sparked this headline…

Answer: I’m not sure exactly if it was a real headline or just something Bernie made up. It would make sense that the war he’s talking about would be the Second World War. The family would go like this: Alvin Tostig, father of Levon, father of Jesus. The song having been written in the early 70s, it would be logical that Levon would have been born around the beginning of World War 2. As for God being dead, I don’t know. Again, it might have been something Bernie made up. 🙂


Question: What is the meaning of the song Daniel?

Answer: Daniel is the fictional story of a blinded Vietnam veteran who comes home after the war and everybody wants him to be a hero, but all he wants is to be left alone. So he takes off for Spain to get away from it all. The story is told from the point of view of his younger brother, who misses him and would like him to come back home. It’s not a true story, just an account of what crippled Vietnam veterans had to go through when they came home from the war. It is inspired by news coverage of the war that Bernie (Elton’s lyricist) watched in the early 70s.


Question: In the song “I Feel Like a Bullet in the Gun of Robert Ford”, who is Robert Ford?

Answer: Robert Ford was the man who shot the notorious outlaw Jesse James. He himself was the victim of murder years later. He was a member of the Jesse James Gang, and he decided to collect the $5000 Dead or Alive award on Jesse’s head. One morning after breakfast, Jesse noticed a crooked picture on the wall and turned to straighten it. Ford took the opportunity and shot Jesse in the back. In the old west, to kill a man by shooting him in the back was a most cowardly thing to do. It gives the victim no chance at self-defense.


Question: What is the meaning of the song “Someone Saved My Life Tonight”?

Answer: The song Someone Saved My Life Tonight is about an episode in Elton’s life. In the late sixties, he almost got married to a woman who didn’t even like his music and what he was doing. He wanted to get out of that situation, but was too confused, and also didn’t want to face her. So one night he got drunk, then left his friends at the bar and went home. When Bernie got back, he found Elton lying on the kitchen floor, his head on a pillow for comfort, while the oven was open letting gas fill the room. But a window was also open. So Bernie started to laugh. 🙂


This suicide attempt was in fact a cry for help.


The line “Paying your H.P. demands forever” refers to installment payments. I’ve been told that the letters H.P. stand for Hire-Purchase or Hire-Pay. It means that he would have had to pay for her expenses all of their married life. He saw this marriage as a neverending chore. In the lines “You almost had me roped and tied, altar-bound, hypnothized“, he speaks to her, saying, wow, I almost got caught in your web!


It’s Bernie who wrote the words, so he had kind of an outsider view of this relationship. He thought she was a Prima Donna, and that Elton was “just a pawn out-played by a dominating queen“. So anyway, after having been “saved” by Bernie, and also by Long John Baldry, the blues singer whom the band Bluesology was backing at the time, who talked Elton into getting out of this relationship, his friends came in the morning with a truck to take Elton home. Those lyrics are really great. They tell the story in a very poetic way, in my opinion. In 1974, when Elton recorded the song, it had been a couple of years since it happened. But Elton was still shaken by this experience and he was very emotional in the studio. The producer made him redo the vocals time and time again until they were just the way he wanted them, and Elton found that to be very painful.


Question: What is the meaning of the song “Empty Garden”?

Answer: The song Empty Garden was written in memory of John Lennon. He is the gardener that cared a lot. In the line “It’s funny how one insect can damage so much grain“, the insect is the guy who shot Lennon, and Lennon was the grain in that imagery. So Elton knocks at John’s door, but no one answers, because Lennon’s dead. “Can’t you come out to play” here means can’t you come out to play music, and the empty garden refers to the Madison Square Garden, where Lennon made his last appearance in public at an Elton John show in 1974, after they had made the bet that if the song Whatever Gets U thru the Night, on which Elton had appeared, became #1, John Lennon would go and play it live with Elton on stage. They also played Lucy in the Sky With Diamonds and I Saw Her Standing There that night. That was the last public appearance on stage by John Lennon.


“A gardener like that one no one can replace…”


Question: Has the song “Dogs in the Kitchen”, the lyrics of which appear in the booklet of the Captain Fantastic album, ever been recorded?

Answer: No, the lyrics never became a song. The lyrics to Dogs in the Kitchen were meant as a direct attack against the people at MCA. Knowing that the record executives would see it on the lyric book was enough for Elton and Bernie. This was the point in time when Elton’s contract was almost up with MCA and he was suing them for the publishing rights to their music which belonged to MCA since signing Elton and Bernie. Elton felt that they had been taken advantage of as young artists and sued MCA. This is when Dick James died, and his son believed it was from the stress of the trial. Elton and Bernie won the lawsuit.


Question: Who was the song “Song for Guy” written for?

Answer: At the time Elton was recording the album A Single Man, in 1978, a messenger boy for Rocket Records (Elton’s company) called Guy Burchett was struck by a car and killed while riding his bicycle. Song for Guy was written for him.


Question: What is the meaning of the song “Nikita”?

Answer: The song Nikita appeared on the Ice on Fire album, which was released in 1985. It is the song that made me fall for Elton and his music! The song is about the old communist USSR and East Germany (the video was shot near the Berlin Wall in Germany) and how people were not free to do as they pleased. It’s not about any particular person, just a general fictional story about how difficult it would be in those days for a Western man to be in love with a woman from the communist side of the world.


Question: What is the name of the song about Jessie?


There is also an Elton John song that contains the name Jessie. It is the song Planes, which was released as a B-side in 1975 and appears on the Rare Masters double album. You can read the lyrics here. This is a really good song, and an incredibly great album, full of great rare tracks and B-sides. Definitely a must-have.


Question: Who is Dr. Winston O’Boogie playing guitar on Elton’s version of “Lucy in the Sky with Diamonds”?

Answer: It is John Lennon, who had a song in 1972 called Winston O’Boogie, so that nickname has come from there.

Fill out the form to receive an email each time a new article is posted on the blog.